On several outings over the past couple of days I have noticed how irresistible Douglas-fir cones are to numerous wildlife. The nutritious seeds are high in fat & protein and provide food all winter in a good cone crop year.

Much activity was happening at Kye Bay, in the trees at the top of the hill overlooking the ocean. Several Chestnut-backed Chickadees were very active snacking on the seeds inside the cones.

A Red-breasted Nuthatch spent much of the time upside-down when it was foraging. The bracts that protrude from beneath the Douglas-fir cone scales have inspired various stories of mice hiding in the cones, with only the back legs & tail visible.

In the small wood at the end of Goose Spit , a whole flock of Red Crossbills were in constant motion as they foraged through one tree after another. I managed to get an olive-gold female in this photo though the head of the brilliant red male nearby is hidden.

Occasionally one would glance up from feeding, showing the unique bill perfectly adapted for tweaking the seeds from the cones, their main food source. They reminded me of parrots with their large bill, colourful plumage, & upside-down feeding behaviour.

It was almost impossible to get a photo of one of the continually moving birds without blurring – this was the best of numerous attempts. This one paused for a moment with a seed in his bill.

At a quick stop at Lazo Marsh I found others also enjoyed the Douglas-fir cones – this Red Squirrel devouring a cone like corn on the cob.

On a nature trip to Lillooet last October, we found a flock of Clark’s Nutcrackers feasting on Douglas-fir cones as well.

A key species of the whitebark pine landscape of the interior mountains, the nutcracker normally feeds on the large seeds of pine cones, so it was great to get photos with this alternate food source. In this light the black wing feathers show a beautiful irridescent blue.

They pull out the seeds with their strong bills, and stash them in a pouch under their tongue – most of them had a full crop! 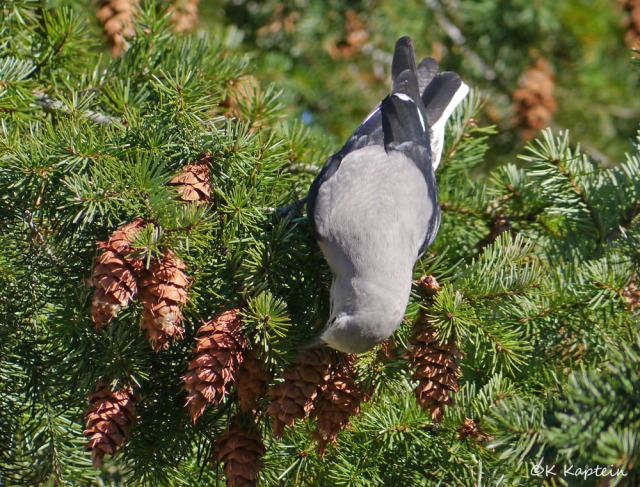 The jay-sized birds are just as acrobatic as smaller chickadees & nuthatches. Each bird buries tens of thousands of seeds each summer and remembers the locations of most of them for food during the winter. Their amazing memory has been extensively studied by researchers.